With the BTO confirmed as winners of the bird contest, we can now announce the scores in the TEAL Cup:
BTO 1738

Despite a slow start, it seems that the RSPB took the lead at the end of June, reaching 2000 species at the start of December. Thanks to all the local naturalists who helped us out, especially those who attended the Lodge 50th anniversary recording day. Adding in all their records takes The Lodge year list to 2101, which feels like quite an achievement. 769 of these were new to the site, and the Lodge list now stands at 4035.

I think my personal highlight is a big yellow slug, but there were lots of colourful, grotesque, rare, wacky, cute, new, or otherwise exciting things for us all. 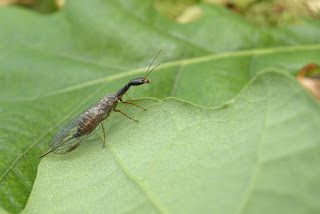 Atlantoraphidia maculicollis new to The Lodge and to us in 2011.

Despite being 11 days too late to count on the Teal Cup list, a female Scaup on E Lake this lunchtime was a welcome addition to a few Lakes lists.
[Edit: Ta very much Neil! Managed to digiscaup it for the record. Nick] 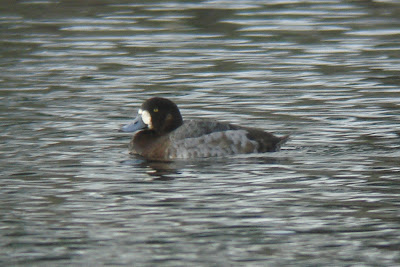 Posted by Neil Calbrade Photography at 14:17 No comments:

The (all-important) result is in!

Its official: BTO staff are best when it comes to "looking out for birds"!!
(though we'll soon have equally 'official' confirmation that our RSPB counterparts are better placed to be "nature's voice", once our inferior all-taxa list has been tidied up and revealed)
Anyway, the final BirdTrack Challenge 2011 score:
BTO: 143 species
RSPB: 140 species
(with apologies to Dave Leech, who was hoping for a 4-species win so that he could use "For birds, for people, four behind BTO")
2011 was a roller-coaster year, and generally great fun for everyone involved. I say 'generally' as I do recall the occasional incident of wailing and teeth-gnashing at The Nunnery, as those blasted Derek White's Eggs Pits additions hit the blog last spring. To show just how close it was, and how many twists and turns there were along the way, here are the comparative species accumulations: 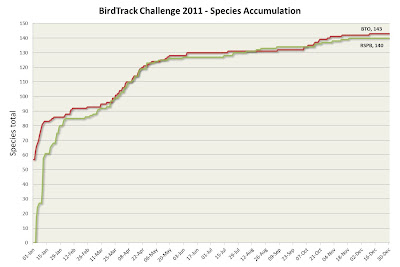 A huge thanks to everyone who got involved and added their records to BirdTrack last year, and long may it continue!
More on that other, less-important, aspect of the competition in due course...
Posted by Nick Moran at 12:48 No comments:

Here's an illustration of what the extra effort put in last year did for my own Lakes bird recording (NB: in September, October and December, I didn't record as many species in 2011 as I did in 2010): 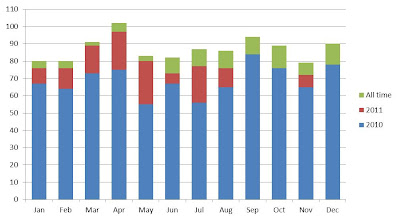 So if you can imagine the White-fronted Goose above a bit mistier and a lot further away, that's how Mark Thomas saw it from The Lodge on 20th November.  It got us up to 140 for the year from the reserve but it seemed hardly worth crowing about as the Nuns had already had these and added a few more for good measure.

Well played chaps - you deserve the win!
Posted by Steve Blain at 16:44 No comments: 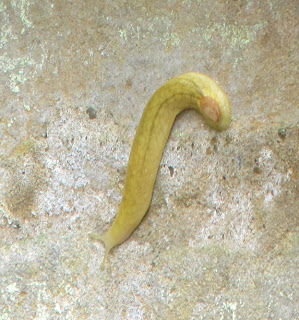 It's all over. One of our last additions, before Christmas, was one that generated an unexpected amount of interest. Colin Campbell and I were walking back through the gardens when he asked me whether I was interested in a yellow slug. When I saw that it had a shell I was very interested in it: I had only ever seen these misfit molluscs in the book, and I always wondered what they would look like in life. Malcolm, an ecologist who has been studying snail books a lot longer than I have, described seeing it as being 'like a childhood dream come true'. Testacella haliotidea subsequently attracted a larger audience than any other gastropod has ever had on the reserve.

Determined to take us over 2000 species, I made a last visit on New Year's Eve, and spent an evening trying to name some of the trickier specimens I had collected earlier in the year. We got there just before the clock struck midnight and all my specimens turned into tiny pumpkins. Or so I thought: it turned out that while I had been at my microscope over Christmas, Dave Buckingham had been at his keyboard entering the rest of his records, giving us a total of 2025 species.